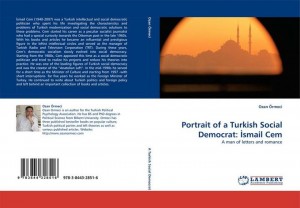 İsmail Cem (1940-2007) was a Turkish intellectual and social democratic politician who spent his life investigating the characteristics and problems of Turkish modernization and social democratic solutions to these problems. Cem started his career as a peculiar socialist journalist who had a special curiosity towards the Ottoman past in the late 1960s. With his books and articles he became an influential and prestigious figure in the leftist intellectual circles and served as the manager of Turkish Radio and Television Corporation (TRT). During these years, Cem’s democratic socialism slowly evolved into social democracy. Starting from the 1980s, Cem appeared this time as a social democratic politician and tried to realize his projects and reduce his theories into practice. He was one of the leading figures of Turkish social democracy and was the creator of the “Anatolian Left”. In the mid-1990s he served for a short time as the Minister of Culture and starting from 1997 -with short interruptions- for five years he worked as the Foreign Minister of Turkey. He continued to write about Turkish politics and foreign policy and left behind an important collection of books and articles.

Ozan Ormeci is an author for the Turkish Political Psychology Association. He has BS and PhD degrees in Political Science from Bilkent University. Ormeci has three published bestseller books on popular culture, Turkish political parties and left theories as well as various published articles. Website: http://www.ozanormeci.com.tr

In order to buy;